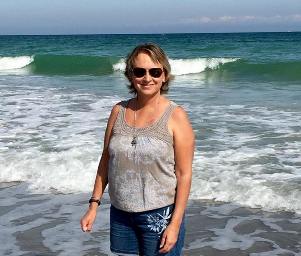 Every time I see my oncologist, he says something like, “The consensus seems to be that people who are on Keytruda should stay on it for at least a year after they’re showing no signs of disease…” So this time before he could say anything more, I asked, “Am I even there yet? What about the SIADH?” He agreed the SIADH is a sign of active disease, and he thinks if I got off the Keytruda now “the cancer would probably come back.” That really didn’t come as a big surprise to me. I’ve assumed all along if I was really cancer free I’d be able to drink water without my sodium bottoming out. Now I just have to hope Merck will foot the bill again next year ($18,000 every three weeks).

Although I know I’m not going to be getting off the Keytruda anytime soon, I’ve been wondering if there are any early results in on what happens when people do get off of it. So I asked my oncologist that question, too. He said, “Not for you. They originally started using it for melanoma patients. Then a few years ago, they started using it for the type of lung cancer you don’t have. But none of that applies to you.” So I asked if they’ve been doing any studies on people with small cell lung cancer and he said, “They’re using it for everyone now, but you’re the first (I’m assuming he meant first group) with this type of cancer. We’re breaking new ground here. It’s a really exciting time in the cancer field right now.”

Hmmm. It’s true this could be an exciting breakthrough in cancer research, but what about me? How does someone who has “terminal” cancer that may or may not be survivable go about living a “normal life.” It’s easy to make plans when doctors tell you there’s a good chance you’ll live. Once you come to terms with it, it’s also easy to make plans when you’re told you’re going to die. But what do you do when the doctors say, “I have no idea?”

My first issue is work. Right now, I’m on SSDI. When I got on it and was told there would be a six month waiting period, the woman who delivered the news said, “If you die before the six months are up, your husband gets nothing.” The smirk on her face told me she assumed that was going to be the case. And to be fair, I could barely sit up long enough to talk to her at the time, so I can see why she may have felt that way. Well, the joke’s on her. Sort of.

Anyway, that was a little over a year ago. I’m allowed to work some, but am not allowed to make more than $1,170 a month. Even with my SSDI, that’s not much compared to what I was making before I got sick. Don’t get me wrong. I’m not up to going full time again, but I feel like I could do a little more than I’m doing. Except I can’t. One mutation of one cancer cell could throw me right back into the cancer spiral, and I can’t afford to do another six-month waiting period. And in a little less than a year, I’ll be eligible for Medicare, which I also can’t afford to let go of in case I get sick again. So for now, I’m just doing what I’m allowed.

Another dilemma. Do I continue saving diligently for retirement, or do I take some of that money and spend it doing some of the things I’ve always wanted to do? I’m not going to stop saving completely, but my instincts tell me to spend some while I’m still able. If I don’t die from the cancer, I’ll just have to work a little longer.

Then there’s the fatigue, which may or may not be caused by the Keytruda. My doctor seemed to think it was being caused by lack of exercise. It’s been difficult for me to get into any type of routine because I don’t have the stamina. I kept thinking that would improve the longer I tried, but it didn’t. I still have a hard time getting up enough energy to get out of bed in the morning or take a shower.

So I bought a Fitbit. Just a cheap one that reminds me to get eat up every hour and move. It counts my steps and lets me know if I’ve burned more calories than I’ve eaten. Ive been doing between 10,000 and 13,000 steps a day in bits and spurts for three or four weeks now. The fatigue has improved some, but it’s still there. I don’t see myself ever being able to get back into the shape I was in two years ago, but I’m giving it all I’ve got.

These are the things I’ve been struggling with lately. I was reading some comments on an Instagram post by someone who’s also having a tough time getting on with life after cancer treatments. One of the comments resonated with me, so I copied it. The woman said one of the biggest thing people who have never had cancer don’t understand is that “cancer doesn’t stop when treatment ends. There’s no going back to normal.”

That’s all for now. Thanks for sharing my journey.

8 Responses to “A lot to think about”