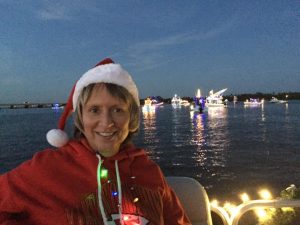 When I was initially diagnosed with lung cancer in 2015, my five-year survival rate was only 2%. Right now, I’m about halfway there.

Last year, in the few months leading up to the new year, I spent much of my time in the hospital; my doctors said I wouldn’t live to see 2017. I honestly can’t believe I made it to 2018.

For those who remember some (or all) of this, please indulge me. I feel this post requires me to back up just a bit.

If not for a twist of fate, I wouldn’t be here today. When I was told there was nothing more that could be done for me, I was seeing an Oncologist in Orlando. She had done a few final rounds of chemotherapy on me that clearly weren’t working. The chemo was dropping my blood counts, and my sodium kept plummeting from the SIADH. Since my oncologist was in Orlando, that was where I was supposed to go whenever I needed to be hospitalized. But I was just too tired.

One night, I became so ill my husband could barely wake me, and I was shivering in a warm house despite being covered with three blankets. He somehow got me to the local hospital, where I proceeded to throw up all over myself in the ER waiting room (great way to get faster service). It was during that visit I was assigned a local oncologist who said he had a new drug he thought might help me (Keytruda).

Fast forward to today. Since I started on the Keytruda just before Thanksgiving last year, my health has improved greatly, and I haven’t been hospitalized since February of 2017. And because of that, I’ve been able to do a lot of things I thought I’d never get the chance to do (or do again) when I was told I was dying (and some I didn’t yet know I wanted to do). For example, I’ve:

And I have a couple more cruises planned for 2018.

All of this has been amazing, and I’m very grateful to have been able to experience all of it.

Yet I’m puzzled when I try to express an emotion other than gratefulness and people try to steer me back by saying things like, “But you must be so happy… “ or “Surely you’re just grateful…”

Of course I am. But are these the only emotions people with cancer should be allowed to feel? What about:

I hate to say it, but telling someone who has cancer they should be grateful only adds “guilt” to the list of negative emotions they’re already fighting. “I know I should be grateful to be alive, but that’s not how I feel… At least not right this moment… What’s the matter with me…?”

It’s not that I don’t appreciate you wanting to help. I know you’re trying to make me think positive because a positive attitude will improve my life expectancy. Right?

While there may be some truth to that, I think the idea of having a positive attitude while dealing with a serious illness is somewhat misunderstood.

To me, a positive attitude doesn’t mean you have to be happy (or grateful) all of the time. It means you’re willing to get out of bed every day and sit in a waiting room for an hour when you can barely sit up in a chair. Or go to another chemotherapy treatment when you know you’re going to go home and throw up for two days. Or do whatever needs to be done to improve your chances of survival no matter how painful it is. That doesn’t mean you can’t cry, or feel angry, or depressed. Or even broken. It simply means you do it anyway, no matter how much it hurts.

When it comes right down to it, all of us should feel grateful to be alive every moment of every day because none of us know when our time will come. But we don’t because we’re human. So next time you feel the urge to tell me I should be grateful, remember that I am. Just maybe not at the moment.

Thanks for sharing my journey with me. May we all enjoy good health and happiness this year and in the years to come.

7 Responses to “A time to be grateful”