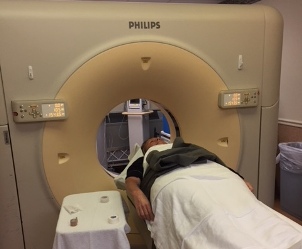 You may (or may not) be wondering why it’s taken me so long to come back with the results of my CT scan. I couldn’t get in until the 24th.

In the meantime, I got a letter from my insurance company saying my PET scan had been denied because that test isn’t the standard of care for monitoring my type of cancer. I asked my oncologist if we should fight it because I’m going to need one eventually, but he said it wouldn’t do any good unless something shows up on a CT scan first.

On October 3, I went to see my nephrologist for the first time in two months. I’m still mostly drinking Gatorade or Propel electrolyte water because more than a glass or two of regular water per day causes my sodium to drop.

I had forgotten the nephrologist had ordered a urine test the last time I’d seen him until he told me the results were back and I still had signs of SIADH. If you’ve been reading my blog all along, you have an idea what that is. If not and you’re interested, see https://www.healthline.com/health/syndrome-of-inappropriate-antidiuretic-hormone#overview1.

After a discussion about whether or not the Keytruda could be causing the SIADH, the nephrologist said the most likely cause is that I still have some cancer cells somewhere. That was rather discouraging.

The next time I saw my oncologist, I told him what the nephrologist had said. He agreed with the nephrologist. He said even if my scans come up clean, what happens to my sodium level when I drink water is the best indication of whether of not my cancer is gone. Well, “remission” was fun while it lasted.

On October 24, I finally went in for my CT scan. I was dreading it because they can’t use my port, and nobody can ever seem to get an IV in me. This time was no exception. I told the tech he wouldn’t be able to use my “good vein” because it had too much scar tissue, but I had a decent one not too far to the left of it. He went for the good one anyway. And it had too much scar tissue for him to be able to push anything into it. So he went for one to the right of that vein, and that one didn’t work, either. Next he went for the hand, which I hate because that REALLY hurts. Ow! Ow! Ow! and no go. He said, ” I think you may be a little dehydrated. Ya think? I’m not allowed to drink water!!!

After the third try and miss, the tech called the IV team. It took the woman from the IV team awhile to get there because she wasn’t working in her usual hospital and she “forgot where radiology was.” She was able to get the IV into the vein to the left of my former good vein. I think I had mentioned I had one there…

The rest of the scan was uneventful, but I had to go get my blood drawn later that day (after my dentist appointment), and all of my veins had already been stuck. So it took the phlebotomist three tries to get a decent blood sample. In her defense, she usually gets it the first time.

Today, I finally got to call for my scan results. My scans were clear. No tumors or lesions of any kind. Well, that’s a relief. Then I called my neurologist’s office for my latest sodium results. My sodium was 134, which is the highest it’s been in awhile (I’ve been running 128-131). More good news!

So where does all this put me on Feiler’s scanxiety roulette wheel? Have I landed on red or black? I guess I’d have to say black. But I only get two weeks of normalcy before I’m back on the scanxiety wheel. Because in my case, blood tests are the equivalent of a scan.

Thank you for sharing my journey.

4 Responses to “Red or Black?”