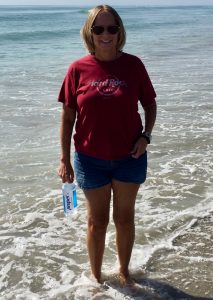 It seems I left off while I was waiting to get my second Navelbine (chemo) treatment. The Zarxio had brought up my WBC, so I was finally able to get my treatment the week after I had all the shots.

A day or two after my second round of chemo, my throat again started to burn, confirming my suspicion that the Navelbine was causing mucositis. I again wound up having to take a few doses of oxycodone to get rid of the pain. In the meantime, I developed severe stomach cramps. I called the oncologist’s office, and he prescribed dicyclomine for the cramps. It took a few days, but they finally went away.

One thing of note. Since I couldn’t remember to take the CBD oil four times a day, I had switched to four drops three times a day. It did nothing to relieve the throat or the stomach pain.

When I went to see the oncologist the following week, we decided the Navelbine wasn’t right for me. So he switched me to Gemzar. For this chemo, I was told there would be no side effects except for low platelets (so, bleeding and bruising). I asked about hair loss; he said he couldn’t make any promises. But that’s not a common side effect of Gemzar.

I started on the Gemzar last Friday (treatments every two weeks). When I got home, I ate lunch, then took a nap until it was almost time for dinner. The next day, I went to sleep right after lunch and pretty much slept the rest of the day. So much for no side effects.

I can feel my body growing weaker, which has caused me to wonder if I really want to go through the whole chemo thing again. Maybe it would be better for me to try a clinical trial (if there are any available for small cell lung cancer). The chemo drugs I’m taking now have been around for years, and they only have a 50/50 chance of temporarily controlling the cancer. And each one I try will likely have worse side effects. If I try an experimental drug, I might have a slight chance of survival. Or a better quality of life. Or the chance to help others survive.

Another thing I’ve considered is just stopping the chemo and enjoying what’s left of my life as best I can. My biggest barrier to that is the SIADH. If I were to go on hospice (which I would definitely want to do), I’d no longer be able to do any treatments that aren’t palliative. Without the Samsca, I’d likely be dead in a week or two. Maybe sooner.

This week started out with a blood draw to check my sodium. I was actually hoping it would be low because I’m about out of Samsca. My nephrologist’s office was never able to get me the last 24 pills, so I knew I would need a hospital stay to get some. And Monday is the best day to go to the hospital if I don’t want to be stuck over the weekend. I also needed to time my hospital stay on a week I don’t have chemo. And we have company coming on Thursday.

I guess I’ve gotten pretty good at knowing when to take the pills and when not to. My sodium was 120. My nephrologist had told me when I was ready for my hospital stay, he would call and get me a bed instead of sending me through the ER. That didn’t happen. So I didn’t get to my room until around 7 p.m., and I didn’t get my dose of Samsca until 9 p.m. And I’ve been up all night getting rid of the excess water. Believe it or not, I’ve lost as much as 7.5 pounds in a day after taking one Samsca pill.

My oncologist stopped by this evening, which surprised me because he usually comes very early in the morning. He said, “What do I need to do to get you these pills.” My mind drew a blank (happens a lot lately). I sort of stammered, “I need to see the…” My mind was thinking social worker, but I knew that wasn’t the term I was looking for. Lucky for me, he finished my thought “…case manager.” The case manager will have to get with the drug manufacturer. He (or she) will also have to run the drug through my insurance company (yet again), and wait for them to reject it. This usually takes around 3 days, so I’m hoping to be out of here by Thursday.

In the meantime, the chemo causes my entire head to ring, and I feel like I’m moving through a fog. And I can’t help but wonder what people see when they look at me. It seems surreal that I could feel so broken but look so normal. It’s like I’m walking around with this weird secret. Sometimes I just feel like blurting, “I’m dying. How can you not see that?” I don’t bring this up to be morbid or to garner sympathy. I’m just trying to be as honest as possible about what it’s like for me to face my own mortality.

13 Responses to “Things that make you go “hmmm””