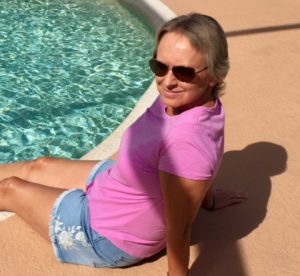 I wasn’t looking forward to August 3 this year. On August 3 of 2015, I was initially diagnosed with cancer. I had no idea what was in store for me, but I was terrified. Had I known the full extent of what I’d have to go through, I’m not sure I’d have had the strength to face it. In case you’re wondering, cancer’s not as bad as you think it is. It’s so much worse.

On August 3 of last year, just when I was beginning to recover from my first round of treatments, I was told the cancer had come back. This time it had spread to my liver. Just a few months later, I was told I would die. And I almost did.

This year, even though I didn’t have any blood tests or scans scheduled to let me know if the cancer had returned, I was still nervous when August 3 rolled around. Because that’s how cancer makes you think. But the day came and went without incident.

It was hard to go back to reality after our trip out west. But two days after we arrived home, I was back in the oncologist’s office, ready for my next round of Keytruda. The doctor still doesn’t know for sure how long I should stay on it, but he’s leaning toward two years. Which means I should be done in late 2018. I’m okay with that as long as I can get Merck to foot the bill for another year. We’ll start working on that in November.

The oncologist thinks I’m doing well, so I don’t have to see him again until September 27. I’ll have another CT scan sometime after September 6, but they haven’t scheduled it yet.

A few days after I went to see the oncologist, I had an appointment with the nephrologist. My sodium has been hovering around 131, which is still pretty low. But it’s been holding steady, so I was hoping he’d take me off the Gatorade. No such luck. He reminded me that Keytruda also causes low sodium, so he wants me to stay on the Gatorade for now. I’m allowed to have around 3 glasses of water each day, and my blood draws have been switched from once a week to every two weeks. I’ve been pushing the whole water thing a little, so I’ll be interested to see what happens when I have my blood drawn next week.

A few days ago, I was with my husband at the dermatologist’s office. My rash is finally gone, but I have a small spot on my cheek that won’t go away. So he asked the doctor to take a quick look at it. The doctor said, “That needs to be biopsied.” Okay, biopsy is NOT a word anyone who has cancer wants to hear. Even so, I made an appointment to come back for the biopsy. Unfortunately, he can’t see me until October 2.

Since that seems like a long time to wait, I called my oncologist’s office to see if he can refer me to someone who can get me in sooner. The nurse said he’s out today, but she’ll check with him on Monday. She also said as busy as the specialists are here, she’d be surprised if he could get me an earlier appointment, but she’d ask anyway. In the meantime, I’m not going to stress over it.

I was thinking a lot this morning about how far I’ve come in the last year. As I was taking my morning walk, enjoying the sunshine and the light breeze, I remembered lying on my couch last fall, looking out at the beautiful day. And the overwhelming feeling of sadness I had knowing I didn’t even have the energy to go out there. And wondering if I ever would again.

I also remember being outside on my lounger one spring day. There was a light breeze blowing and it was a picture-perfect day. Intillectually, I knew it was a beautiful day. But I wasn’t physically able to feel any of the sensations that should go along with that (the temperature, the breeze, the joy). I couldn’t feel anything. I’m not sure if that makes any sense, but I can’t think of a better way to describe it.

And I remember walking one lap around my pool one day and collapsing. And having to hold onto my husband’s arm to get out to the car because I was afraid I would fall. And barely being able to sit up in the hospital waiting room…

But I have reason to  hope this year will be different. For the first time in my life, I’m looking forward to autumn and being able to do all the things I missed over the last two years. Watch football. Go up to the Smoky Mountains and see the fall colors. Decorate for Halloween. Eat Thanksgiving dinner. Make Christmas candy without any help.

Considering where I was just a year ago, to be able to do all these things is nothing short of a miracle for me. And no matter what happens with the next blood draw or the next scan, I feel truly blessed. Each day I’m able to get out of bed is an absolute gift.

Thanks for sharing my journey with me.

4 Responses to “Another year gone by”