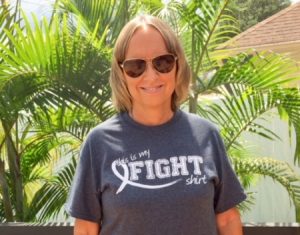 I think I left off around the time I went for my brain MRI. That scan was clear, so no brain tumors as of yet.

On May 23, I went in for my first new chemo treatment. I was pretty anxious and had a lot of questions about what the drug, vinorelbine/Navelbine, would do to me. My oncologist assured me the drug had virtually no side effects, but offered to give me an anti-nausea med before my chemo in case I was worried. I took him up on his offer.

I felt fine when I first left the cancer center. But when I got home and went outside to walk, I started to feel like everything was moving in slow motion, including my brain. So I finished my walk, then took a 2-hour nap. It seems like I do that fairly often these days. When I got up, I felt fine again.

The next day, I tried the CBD oil (medical marijuana) again. Even though the doctor who prescribed it said vaping is best for people with lung cancer, I wanted to talk to my oncologist before doing it because I didn’t like the idea. My oncologist said it was okay. So I gave it another try.

By Friday night, my entire mouth and throat felt like they were on fire. I initially thought it was from vaping the CBD oil. But I also knew from past experience it could be mucositis from the chemo. Since I couldn’t be sure, I put the CBD oil aside again.

By Saturday night, I couldn’t take the pain anymore. So I broke down and took a few doses of oxycodone (four hours apart). It took the pain away, but for me, that’s not what I’d consider a long-term option. Fortunately, by Sunday I felt better.

On May 30, I went for my second round of chemo. One of the nurses accessed my port and drew my labs. Then I went down to see the oncologist. When he walked into the room, he said, “No treatment today.” What??? It turns out my WBC was really low (Normal is around 3.9 to 11; mine was 1.03.). One of the reasons we’d chosen the Navelbine is because it wasn’t supposed to wipe out my blood counts. Since WBCs usually come back on their own, my oncologist told me to come back the next week and we’d try again.

The next day. I went to see the nephrologist. I was hoping to get some sort of plan as to how often I needed to take the Samsca, and how often to have my blood drawn. I felt like he’d left me hanging over the holiday weekend. On the Sunday before Memorial Day, I felt really sick. So I took a pill that day and another on Monday. And I felt much better by Monday afternoon.

While we were discussing the Samsca, I told the doctor I was about out of pills, so I was planning to go to the hospital the next time my sodium dropped because up until this point, that’s been the only way I could get more pills for free (My insurance company won’t pay for them, and I think they’re about $4500 for 10 pills, if I’m remembering correctly). Anyway, they’re way out of my range. My nephrologist said he thought one of the women who works in his office could get them for me without the hospital trip. I had my doubts because we’d tried it before, but I was all for trying anything that would save me from a hospital visit. Especially with my WBC being so low. I told the doctor to make sure he ordered the 30 mg pills instead of the 15. That way I could take half a pill each time and they’d last twice as long. He agreed.

The nephrologist told me to sake a Samsca the following Sunday and to have my blood drawn weekly (so still no real plan as to how often to take the medication), then he took me out front and asked one of his employees to see if she could get me the free Samsca. She went through the drill (Insurance would have to deny my claim before I could be considered for the free pills…). I asked her how long all this would take because I was down to my last few pills, and she said about a week. That would work. So I went home feeling pretty good overall.

On June 6, I went back to the cancer center fully expecting to finally get my second chemo treatment. But my WBC was only up to 1.17, so again no treatment. Obviously, something was going to have to change. So the oncologist suggested we try Zarxio, which is similar to Neupogen in that they are both designed to improve WBCs between treatments. The Zarxio is given in five injections (one a day for five days). I asked about the Neulasta, which they attach to your stomach, and it automatically gives you a shot the next day. But that can only be given every two weeks. Since my chemo is weekly, Zarxio is our only option. So I agreed.

The next day, the Walgreen’s specialty pharmacy in West Palm Beach called and said they had six Samsca pills ready to ship to me at no cost. They said they had to wait on the insurance denial before they’d be able to send me the other 24. I was happily surprised. They came by mail (someone had to sign for them) the next day. At first, I was pretty excited, but when I looked more closely, I discovered they were only 15 mg/each (great) instead of 30. That means the other 24 pills will also only be 15 mg if I do end up getting them. But six free pills is still better than none.

On June 7, I had my blood checked again. Later that afternoon, I got a call from one of the women at my nephrologist’s office. She said my sodium was only 123, and the doctor wanted me to start taking a Samsca pill every day. At that rate, I’ll be out in just a little more than a week. I told her I had only received six pills so far, and that they were only 15 mg, when I had asked for 30. So she looked at the prescription, and it was for 30 mg tabs. But the instructions say, “Take 1/2 tab every day…” Seriously, this is not rocket science. Nor is this the first (or second, or third) time we’ve been through all this. So, I told her to tell the doctor I was only going to take the pills every other day. Then I decided later to just take them twice a week like I have been, and see what happens.

Today was my fourth Zarxio shot, and having appointments six days a week is already wearing on me. I’m not a morning person, so setting an alarm every day, including weekends, isn’t going to work for me. If this is how it’s going to be every week, we may need to discuss other chemo options, especially if the sore throat returns with my next treatment.

In the meantime, I went back down to the medical marijuana dispensary in Vero Beach to exchange the inhaler for the drops. The place is pretty creepy. It’s always packed, and most of the people there are either really young or look like middle-aged hippies. But I know I shouldn’t judge because I don’t really look ill myself right now, so I have no idea what any of these people are going through. There’s an armed guard standing at the entrance to the back of the building, which is where you actually buy your CBD oil. You have to give the guard your driver’s license and your state-issued medical marijuana card. He looks at it, tells you to have a seat, and gives it to another guy to enter your information into the computer.

When you get to the back of the store, there are about 3-4 employees standing behind a large deask with a couple of cash registers (They only accept cash.). There are no products visible, just samples they use to demonstrate how the various dosing methods are used. And pamphlets you can take home with you. The place I go to only sells oils and inhalers, syringes, etc. No edibles. The cost of the CBD oil with THC is $70/bottle, and one bottle should last 3-4 months if I stick to two drops, four times a day. Which was just a guess based on how the doctor had told me to use the inhaler.

After all that, the drops are working better for me than the inhaler because they don’t make me cough, and I don’t feel the THC as much as I did with the inhaler. But I’m not use to taking anything four times a day, so most days I forget. So on those days, I try to do three drops, three times instead. I’m sure the doctor will probably tell me I need more. But I’m not made of money, and that place is really creepy. So I don’t want to go down there any more often than I have to.

My next chemo treatment is on Wednesday, if the Zarxio has done its job. We’ll see what happens from there.

On Thursday, I’ll take my next blood test and see how my sodium’s holding up. My insurance denial letter came today, so I’m hoping I’ll get a call about the other 24 Samsca pills in the next day or two.

8 Responses to “Back on the lung cancer roller coaster”