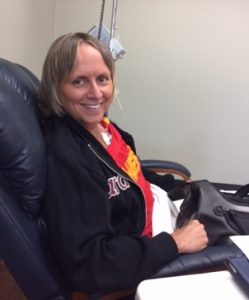 On February 28, I went to see my oncologist to get an explanation as to why I wasn’t told about the liver “lesion” on my last two CT scans. Last I heard, I didn’t have any tumors. I also wanted his take on what my nephrologist had told me about the Keytruda causing my kidneys to fail and the possibility that I may need to get off it.

When I asked about the liver lesion, the doctor said it hadn’t shown up on my May PET scan is because it isn’t cancerous. What was once a tumor is now likely scar tissue, and that’s what was showing up on the CT scans. So, good news there!

Two weeks later, I went back for my next Keytruda treatment and asked my oncologist what my most recent eGFR had been. It was 62, which is on the very low side of normal. He said, “Well, if you do have to get off the Keytruda, you can always get back on it if your kidney function improves. “Can I?” I asked. “Is it going to be as effective? Of course, he couldn’t answer that question. The drug is just too new.

As has been pretty common throughout this entire ordeal, my oncologist and nephrologist haven’t been communicating, but the oncologist did say he’d call the nephrologist that afternoon to discuss the situation. For now, I’m assuming no news is good news because nobody has called to tell me not to bother showing up for my next Keytruda appointment.

While I was at the oncologist’s office, I mentioned I was having some pain in my hips and in my left calf. So he pressed on some spots on my hips and nothing hurt, so he moved on to my calf. He squeezed in several places during which I moaned, “Ow, ow, ow.” Then he ordered an ultrasound of my left leg. I’m still waiting for someone to call and set it up.

In other news, I feel like the fatigue from the treatments is becoming more cumulative, and it’s really interfering with my trying to regain some sense of normalcy. Most days, I’m able to get out and do things for short periods of time. But even little things like going out to the grocery store seem to take a toll on me. I’ve never been a person to take naps even though I’ve been working at home for more than 10 years. But I seem to need them on a regular basis now. I fall asleep if I’m in the car for more than 15 or 20 minutes (when I’m not driving), and sometimes I’ll fall back to sleep an hour or two after I get up. I thought walking would help build my stamina, but it doesn’t seem to be working. On the other hand, maybe the fatigue would be worse if I wasn’t doing it.

It’s been frustrating going through all this without having anyone to talk to who actually gets what I’m going through, so I started looking for people with small cell lung cancer and wasn’t having any luck finding any. Then an old childhood friend sent me a link to a SCLC Facebook group. I’ve found my people!

It’s been interesting reading other peoples’ stories and a bit rewarding to help out the newbies. But almost every day, at least one member of the group dies. And many of them are dying because Keytruda and other immunotherapies haven’t yet been approved for SCLC. In the U.K., the doctors aren’t even allowed to prescribe it. And many oncologists in the U.S. still won’t. I know it’s not the answer for everyone, but a lot of people are dying needlessly. I’m doing what I can to help educate patients so they can stand up and demand to be treated (at least in the U.S.) or find a new doctor who’s willing to take a chance.

That’s all I’ve got for now. Thank you for sharing my journey with me.

4 Responses to “Oncologist visits, Keytruda problems and other cancer woes”